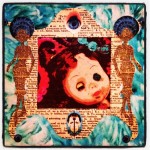 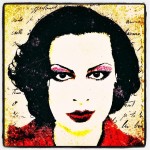 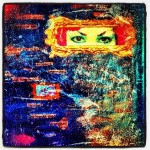 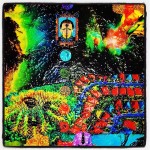 Raised in the Midwest, Jessica Kallista moved to Northern Virginia in 1997. Her performance art piece Aspasia’s Elements was featured as part of Poetry Theatre at George Mason University’s Black Box Theater in 1998.  She received her MFA in Creative Writing with a concentration in poetry from George Mason University in 2002. Her poems have appeared in Phoebe, Sou’wester, and So to Speak. Possessed with a frenetic energy to constantly create both literary and visual art she began to combine the two in collages that employ elements of chance, repetition, appropriation, the uncanny, and the sublime. Her work incorporates found and original photography and text to form her own unique style of collage and mixed media art. Her work has most recently been included in exhibitions at George Mason University, The Adam Lister Gallery, and Epicure Café in Fairfax, VA, Gallery Underground in Arlington, VA, as well as Tempus Projects and The Bricks of Ybor in Tampa, Florida. She enthusiastically participates in the worldwide phenomenon that is Free Art Friday and has placed at least one piece of free art in the suburban wilds of Northern Virginia for any random person to find and keep nearly every Friday since August 2013.

Jessica’s work is often concerned with the everyday, calling to mind the familiar artifacts and ephemera of the mundane and reimagining and transforming them into fantastical dreamlike elements of magical worlds that are just below, above, or somehow beyond our reach. Her collages establish an ongoing narrative exploring the concept of being a stranger in a strange land. Being out of place, out of body, and/or other bodied allows for investigation of and experimentation with known and unknown environments as well as ways of inhabiting bodies, fluid identities, space, and place. Her recent series, Blue Shag and Suburban Chakras, specifically addresses embodiment, identity, space, and place as experienced by a stranger in the strange land that is Suburbia. Communicating the lost, almost shipwrecked, displacement in an unlivable, non-sustaining, and unsustainable world while still maintaining the ability to access and reveal a liberating and vibrant sense of magic is a constant and continuing goal of her work. The process, practice, and pieces form a collective call to action, a documentation of a lived experience, and a communication with the world beyond this strange land.